What if my demons were useful? Truth be told, it pains me to even consider the question. Fuck them. Hit'em with a brick.

Ugh, but I'm tired if holding them off. You know me, I held them off for years with self medication, adrenaline highs, and aggressive sobbing in the kitchen. I'm tired because that didn't do squat to help me get rid of them.

The harder I fought, the harder they fought.

It's just like guerrilla warfare. We fight, they fight, we take ground, they cede it. We block off, they slip in, we adapt and they change their tactics.

What I've begun to see more clearly from practicing yoga is that these demons manifest as tension or pain in my body.

(I know I've made a jump from the mental to the physical, but bear with me, I'll bring it back around)

As you know, and if you don't know, you can watch the story at the top of the blog, the IED strike almost blew my nuts off. Needless to say this trauma has caused some residual suffering. I experience this suffering as a daily reoccurring pain in my hips.

It feels like my muscles are made of steel cables. I've had this pain since Iraq, it flairs up more on some days than others, but I'm a warrior and I deal.

In last weekends yoga classes, I was challenged by a very simple exercise to bring some easy stretching into my hips.

Now I've stretched before, but you can't stretch a steel cable. These stretches, however, were different. I was taught to use what I now think of as my BRM Breath to focus on the sensation as a guide instead of as the enemy.

(I call it BRM breath because the breathing I was taught during Basic Rifle Marksmanship in Basic Training to create a smooth trigger squeeze, is the same as yogic breathing. The difference is that my goal is to calm my body down to get into areas that won't relax).

This was no picnic, but after I stopped fighting it became easier.

Easier to think about too.

I'd get pissed when I'd feel the pain.

I wouldn't go so far as to say that I now like the pain in my hips, but I do think about it differently.

With these yogic tools and the new mindset, the pain is now my guide instead of my enemy.

This post was guided by the 52nd stanza of the Art of Peace, a book written by Morihei Ueshiba
Armor Down has a website. Check it out.

If you like the AD Facebook page and I'll email you the PDF of a book called "Mindfulness in Practical English".

Thrive as a civilian. 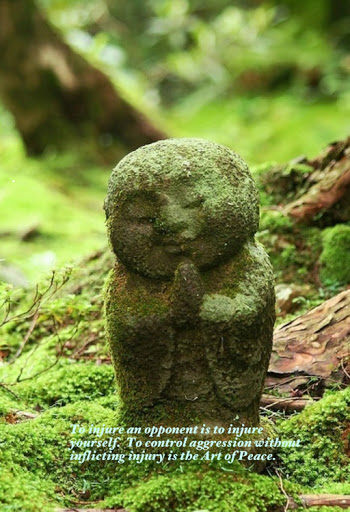 Ben King
Regardless of branch, we service members were trained from day one that being hyper-vigilance and putting the mission first meant the difference between life and death. Down range these fundamentals are force multipliers for the military, but back home they can contribute to dis-ease for the individual. I developed the training principles of Armor Down by dedicating 114 weeks of my life to the study of The Art of Peace (AOP), the practice of Mindfulness to tame my hyper vigilant mind and the use of exercise to re-train my mind to listen to my body instead of ignore it. This Blog represents the first example of how a service member can use the AOP as a path to thriving as a civilian.